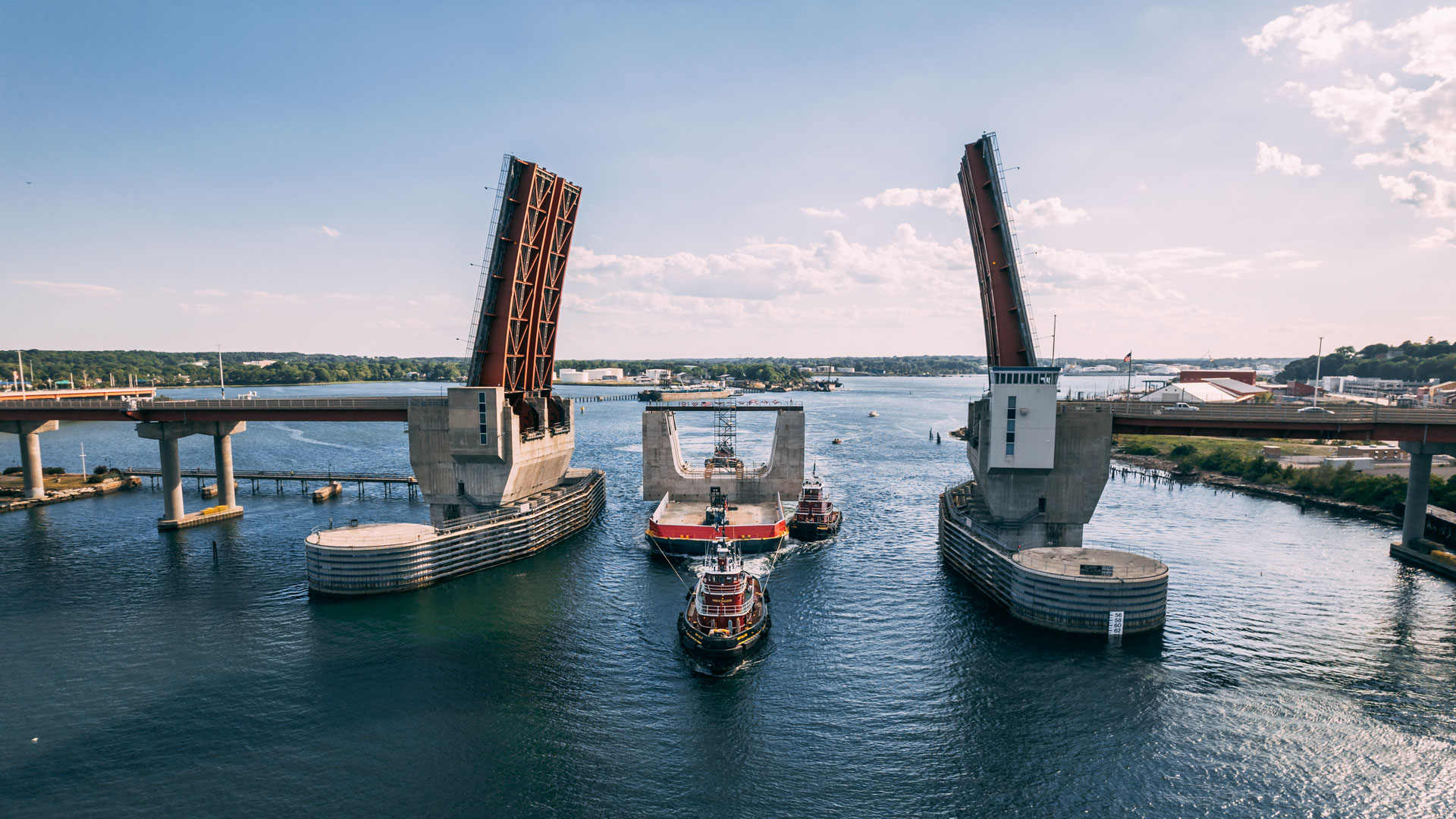 The U.S. Navy is undertaking a superflood basin design and construction at the Portsmouth Naval Shipyard in Kittery, Maine. The 3.5-acre super flood basin is being built in front of an existing dry dock that artificially raises the water level in the river. Initially constructed for World War II-era submarines, the floor of the Dry Dock 1 is too shallow for current operational requirements. Presently, the shipyard provides artificial ballast and is tidally restricted to only a handful of days per month for docking and undocking evolutions at Dry Dock 1, which is not sustainable in the long term.

As part of Phase 310 of this project, awarded in December 2019, Cianbro constructed the Dry Dock West 1 entrance structure at its Ricker’s Wharf facility in Portland, Maine.

Per original contract documents, the engineer of record and owner envisioned the structure being cast in a dry setting, then launched and floated into place via waterway, in the water behind a barge. However, Cianbro realized that site conditions presented challenges to constructing the entrance per contract details. Instead, the team engaged a third-party engineer -- an industry expert in floating precast construction -- to assist with the proposed design.

“One of the things we said from Day One is that we know we can do this,” said Brendan Scully, Project Manager. “It’s not often you see something of this magnitude, certainly of this importance, built on a barge, let alone overhanging the barge, and then picked up using strand jacks. There was never a question of if we can do it, just a matter of how we would do it. Every team member we have here has embodied that can-do spirit.”

Cianbro’s final proposal included casting the 5,338-ton entrance structure aboard the Weeks 2701 deck barge, then floating it down Portland’s Fore River by towing it on the barge, and setting it into place at the bottom of the river using a strand jacking system. The structure is made up of over 2,700 cubic yards of concrete and nearly 500 tons of rebar, and to limit the weight of the structure, it was precast with several void spaces.

The structure’s base was built with 30 void spaces between an upper and lower slab densely populated with rebar. The area from the base of the caisson seat to the top of the structure, referred to as the “wing walls,” was essentially a hollow structure with tapered walls. These techniques to lighten the structure’s weight enabled the team to successfully transport it as Cianbro had planned. The entrance left Ricker’s Wharf on June 21, 2021 and arrived at Portsmouth Naval Shipyard on June 22. Now that the structure is in place, the team is filling the 5,000 cubic yards of void space of the entrance structure with marine concrete batched on site, as well as the void spaces in the wing walls.

On August 13, the federal government announced it was awarding 381 Constructors a $1.731 billion contract to complete the construction of the multi-mission extension project for Dry Dock No. 381, also known as the P-381 project. 381 Constructors is a joint venture of The Industrial Company (TIC)-a Kiewit Corporation, subsidiary-with Cianbro Corporation and The Middlesex Corporation. This new contract is a continuance of Cianbro’s P-310 Superflood project completed in June.

The two new dry docks will be of sufficient size and depth to support the maintenance and overhaul of Virginia-class submarines. This seven-year project will include 4,000-ton concrete monoliths that will be constructed at Cianbro’s module facility in Brewer, Maine. In addition, the basin will have extensive foundation work consisting of drilled shafts, secant/tangent pile walls, micro-pile, jet grouting, sheet pile cofferdams, rock removal, and mass concrete.

To read more 2021 highlights from The Cianbro Companies, click the link to read The Chatter.